The members and visitors of Architect Chapter No 1375 were most honoured to receive the Grand Superintendent Tony Harrison to their installation meeting which was held at Urmston Masonic Hall. Tony was accompanied by grand officers Colin Rowling, Timothy Burgess and South Eastern Group Chairman Gareth Jones, together with other distinguished Provincial grand officers, group officers and visiting companions. 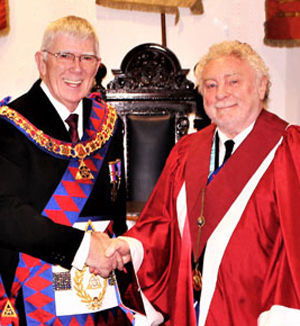 After opening the chapter, acting first principal David Durling convened the business of the chapter at which point, Provincial Deputy Grand Director of Ceremonies Mark Barton led Tony Harrison along with the other grand officers into the convocation to be welcomed very warmly by David.

The installation ceremony then proceeded, given with slick, practiced skill by the three principals and being well guided by director of ceremonies Gareth Jones. Wallace Fraser was installed as first principal for the first time (in this chapter) with Malcolm Jacobs and Chris Knowles continuing as second and third principals for another year. There then followed excellent robe addresses given to each of the three Principles. This was followed by an excellent and moving address to the companions of the chapter given by Tony Harrison.

On completion of the ceremony, Tony rose to bring his greetings and good wishes for a prosperous, healthy and enjoyable year and complemented the chapter on its unique and excellent take on the installation ceremony. He commented that whichever chapter he attended across the Province there were always interesting variations within the ritual. 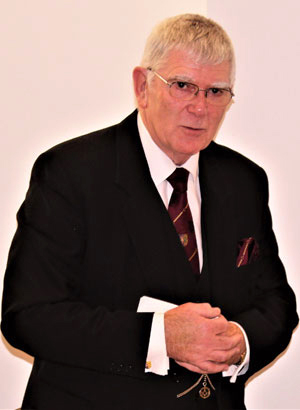 Tony responding to his toast.

First principal Wallace Fraser then rose and thanked Tony for his very kind words and on behalf of the chapter presented a charity envelope and with Wallace’s permission Tony read out the contents which was a cheque made out to the MCF 2021 Festival for £150. Tony thanked the members, praising the very generous donation given the small size of the chapter.

At the first rising, Colin Rowling conveyed the greetings and good wishes on behalf of the grand officers saying that it had been an excellently performed ceremony and welcomed Wallace into the chair as a first principal once more and wished him, and the chapter, an enjoyable ensuing year.

A very friendly and buoyant festive board continued and Colin rose to toast the Grand Superintendent, giving a brief potted history of Tony’s many and impressive attributes and qualifications. Tony then rose to reply and again offered his congratulations to the companions. He made reference to the age of the chapter (144 years), and went on to exhort every companion to promote the Royal Arch as the culmination of the Masonic journey and encourage recruitment, the Membership Pathway and the new online resource Solomon, rounding off with a brief discourse on the 2021 MCF Festival and finally thanking the chapter for the welcome they had extended to him.

The toasts of the evening having ended, a most enjoyable meeting concluded.