Members and visitors of Foundation Lodge No 5394 were delighted to welcome Assistant Provincial Grand Master Barry Jameson, as their principal guest to their installation meeting to witness master elect Phillip Holland being installed as WM for the ensuing year. 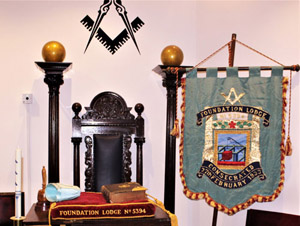 The lodge cushion and banner.

The WM John Ludlow opened the lodge and conducted the initial business as per the summons, there then came the expected knock on the door and DC Terry Howard entered and announced that Barry Jameson stood without and demanded admission, where upon Barry entered in ceremonial procession accompanied by the grand officers.

John, having welcomed Barry, offered him the gavel in an attempt to pass on the responsibility for the forthcoming ceremony. Barry accepted the gavel but politely declined to carry out the ceremony and handed the gavel back to a crestfallen John.

Barry having been welcomed, John proceeded to carry out the installation ceremony in a most considered and exemplary fashion proving that his previous fears had been unfounded and the installation was carried out flawlessly, a fact that was later remarked upon by both Barry and Gareth!

Phillip, having been installed, there then followed excellent presentations of the working tools in the third degree by Trevor Bedder, in the second degree by Jeffrey Newbrook and in the first degree by John Newall.

Pictured from left to right, are: Barry Jameson, Phillip Holland and John Ludlow.

On completion of the installation ceremony, Barry rose to bring the sincere greetings, best wishes and congratulations from the Provincial Grand Master Tony Harrison, saying that Tony was aware that Phillip was taking the master’s chair once more and wished him and the members of the lodge a very happy, healthy and enjoyable year ahead and also, on Tony’s behalf congratulated installing master John, DC Terry Howard and those officers and brethren who had taken part in producing an excellent ceremony.

In response, Phillip rose and thanked Barry for the good wishes he had conveyed and then with considerable pleasure presented him with a series of charitable donations by way of cheques for £1,500 made in favour of the MCF 2021 Festival, £250 to the Beechwood Cancer Care, £250 to Sidmouth Donkey Sanctuary and £250 to Riding for the Disabled.

Barry, impressed by the contributions, commented on the remarkable generosity of the lodge and thanked them on behalf of all those who we may never know, that would eventually benefit.

It soon transpired that those most generous contributions were to reflect further honour on the lodge as Provincial Charity Steward Denis Tierney rose and gave a splendid address to the newly installed master and the lodge charity steward, offering many congratulations and presenting a certificate raising the MCF status of the lodge to Grand Patron!

On the first rising Gareth responded on behalf of the grand officers and said he, and they were pleased to see such an excellent ceremony, he welcomed Phillip as a ruler in the Craft once more and wished both he and the brethren a happy and healthy year. 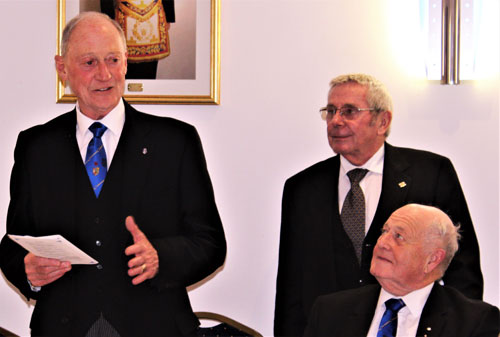 Barry responding to his toast watched by Phillip Holland (seated) and Terry Howard.

During the festive board, Barry gave the response to his toast, offering his own congratulations to the lodge members, saying he thoroughly enjoyed the installation meeting. He then went on to give both PrGM Tony Harrison’s thoughts and his own on the current state of Freemasonry. He made reference to the 2021 MCF Festival, which had only one more year to run, how we should follow a natural progression taking our Masonry to the next level by joining the Royal Arch and exhorting everyone to support our Masonic Halls.

Rounding off his response, Barry expressed his concern over the declining group membership numbers, down in 2019 to 8,500 from 10,500 in 2014 and how retention was every bit as important as recruitment!

Newly installed master, Phillip, having responded to his toast then proposed a toast to the IPM, John Ludlow presenting him with a past master’s jewel. John, clearly moved by the presentation suitably thanked the lodge members.

This concluded what had been a thoroughly enjoyable and memorable evening and events were brought to a close with a most suitable and fitting conclusion.